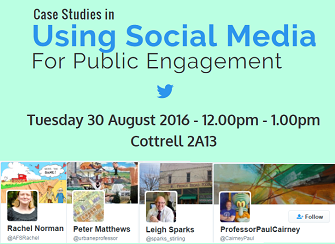 Did you know that the University of Stirling has publications with over 17,000 co-authors (external to Stirling) and currently collaborates with 100 out of the 193 countries in the world? With these facts in mind, it is important to explore the tool that is social media and how it can support such research activities. 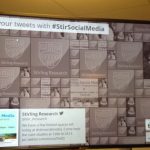 Our systems manager, Lauren Wilson (Research & Enterprise Office) invited four researchers who are active on social media to come and share their experiences and insights on how they use social media in their public engagement activities. The audience were also asked to engage throughout the session using #StirSocialMedia and their tweets would displayed on our specially created tweetwall. 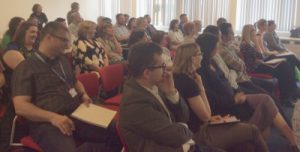 As part of the Research Bites Programme on the 30th August, an audience of 40 researchers and support staff from across the university heard from Prof Leigh Sparks, Prof Rachel Norman, Prof Paul Cairney and Dr Peter Matthews.

Here are my reflections from the session:

Up first was Prof Sparks, Professor of retail studies has been blogging since 2011 and tweeting since 2013 in order to showcase his work, maintain writing when he wasn’t doing any academic writing, to answer the continuous questions from journalists and to reduce his frustrations for the university systems (sorry Lauren). Mindful to not let social media take over his life, Leigh recognises the limits and typically produces one blog post a week.  From which, Leigh attains international reach and impact through his blog whilst increasing his public engagement activities as his blog provides resources and commentary for free. Leigh has found opportunities have arisen as a result of his social media activity, such as conversation articles, positioning and branding and the maintenance of a voice when his other academic roles are more in demand.   Leigh’s main message was that the communication channels (his blog & Twitter) provide ample opportunity for amplification, interaction and reward, parting on the rhetorical question to the audience: ‘Why wouldn’t I use the tools available to communicate my work to a variety of audiences?’

Next up Prof Norman,  chair of Aquatic Food Security, talked about her three purposes for social media: public engagement; communication and engagement and discussion of gender issues in academia and STEM subjects. Relatively new to Twitter (March 2014), Rachel is moving into complimenting her social media range through blogging, starting off by blogging for other people before having her own (see Her blog on surf and turf). Rachel’s considerations when using social media are (1) the audience to whom you are speaking, (2) how the message your put out can raise your profile (particularly through tactical inclusion of relevant individuals / accounts) and (3) how social media generates links and starts communication. Relationship building was a point that Rachel picked up, which i agree with strongly with regards to why to use social media.  Through your social media relationships or ‘Twitter friends’ as i like to call them, the dissemination of your information is increased, you can access more information and you can extend the research of your research through reciprocal tweeting.  Prof Norman spoke how she manages her time on social media by checking it in the morning, with her emails and turning it off when she cannot be distracted.

Next to share his insights and experiences was Prof Cairney of Politics, believes that using social media improves your work rather than takes you away from it as the medium of social media requires you be quick & specific – there are ‘unexpected payoffs’. Two strong benefits Prof Cairney gains from social media are the relationships that it allows you to build and the ability to respond to timely pieces through his blog (rather than wait for that academic paper to be published).  Starting with 1500 hits a month, Paul’s blog is now hitting 15,000 hits a month ! And through his own blog, other blogs, such as the Guardian, re-post his blog pieces which again extends the reach of the messages he has to share. The scale of attention from the Guardian blog led to a meeting with senior civil servants in Brussels as his work was brought to their attention and a tweet from Brian Cox! An important insight that Paul shared was with reference to his Conversation blog on Devo Max, which will the blog attracts between 2-5000 hits, the blog piece was edited by a journalist, which led to Paul receiving verbal abuse as a result of the title used. Therefore, posting on other blogs other than your own runs the risk of unwarranted confrontation but this should be weighed up with the appreciation that you will receive coverage that otherwise would not be managed.

Last but by no means least was Dr Matthews whose main message was about identity. Starting his tweeting journey about #Kale and an organic box he had received, Peter soon realised the reach that social media could attract with 89 replies to his request for ‘recipes for #kale’. Through using his own personality and building up a persona online, Dr Matthews has found that his non-academic tweets generates the opportunity for people to ‘bump into his research’. Dr Matthews raised important points about your online identity with consideration for the choices he has made online: to not engage in a particular political stance in case it affects his impartiality as researcher; the things and way that he communicates online and the networks that he can build through social media – retelling how an edited collection of his was the result of Twitter. Again, for Peter his use of social media is about getting a wider message out and catalysing his social capital – an important activity especially for early career researchers. Reiterating the message that Prof Cairney made about how Social media doesn’t take you away from your work, Dr Matthews concluded with his point that social media is just technology and tools which ‘makes things you do easier’. 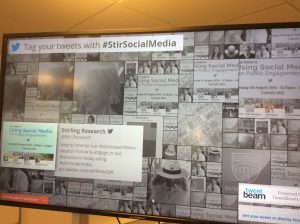 The conversation was continued throughout the session using a tweetwall in which the audience and the panel (I’m looking at you Peter) tweeted their thoughts and observations that then appeared on our tweet wall. It was great to see the wall develop throughout the session and the engagement that occurred even outside the room on Twitter. The floor was then opened up for discussion, which involved how the panel manage their social media activity (a useful tip was Tweetdeck); the use of Twitter in a corporate identity and whether or not the panel engage with students on social media ( typically they don’t so to ensure that student’s online aren’t given an unfair advantage but could use social media as a source to point out and link to resources alongside other sources such as succeed).

I’d like to thank all of our four panel speakers and our audience on the day, the session was really informative and it was great to share experiences and open up the conversation on using social media for public engagement. REO (Fiona Millar) and CMPE (George Vekic) are always happy to help anyone interested in getting on social media or learning how to use social media differently, so please do get in touch if you would like any further social media training or discussions.

Follow the conversation via #StirSocialMedia (feel free to keep the conversation alive and ask questions using this hashtag) or here via storify: https://storify.com/Stir_research/stirsocialmedia#publicize