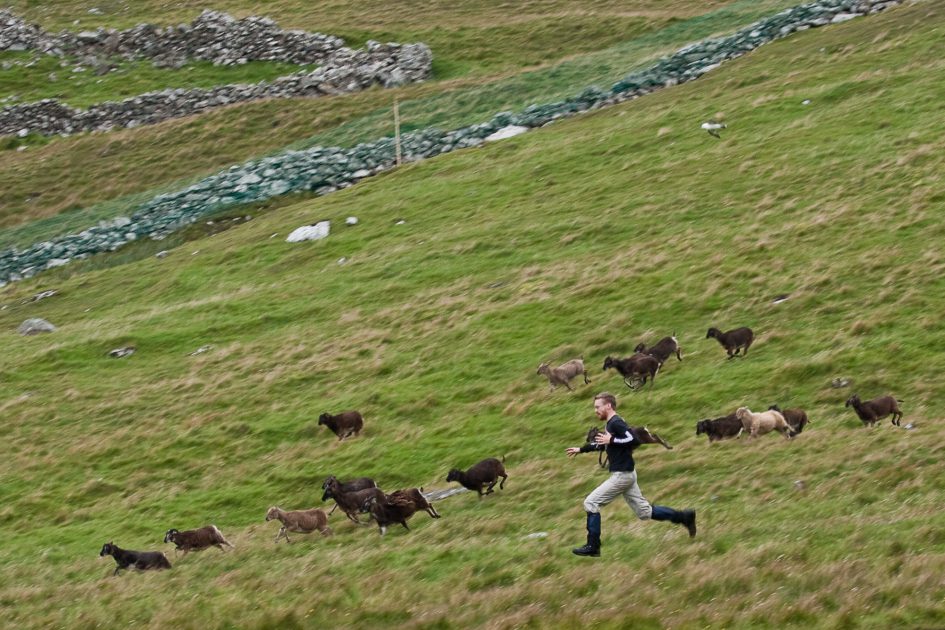 Attempting (along with many others, out of shot) to herd St Kilda Soay sheep towards a capture corral, where they will be weighed, measured, and blood-sampled. 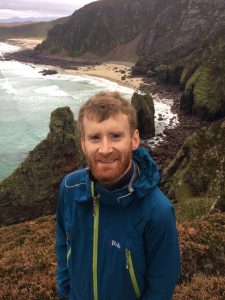 Eleven years ago, I took a class on Behaviour, Ecology and Evolution during my degree at the University of Nottingham. Last week, I found myself back at Nottingham and in the same class, but this time standing at the front and leading a discussion session about the evolution of diabetes. How did I get into the ridiculously privileged position of doing evolutionary biology for a living?

It started with the class I was now teaching on. There were no lectures, no labwork, and no exams: every two weeks were given, researched and wrote three essays. These were all fundamental questions in ecology and evolution: ‘why do we age?’, ‘why are rainforests so diverse?’, ‘why do bowerbirds build bowers?’. The experience of starting a week with no idea, researching it, and then writing about it, was tremendously exciting. I was hooked.

After finishing my degree in 2006, I worked in a supermarket, saved assiduously, went to the Galápagos, before starting a PhD in Edinburgh in 2007. 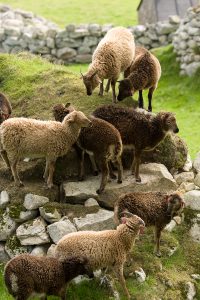 St Kilda Soay sheep, showing off both their variety of colour and horn morphs, and their agility and athleticism.
Photo by Arpat Ozgul

I worked on wild sheep living in the remote St Kilda archipelago. I had a wide variety of wonderful experiences: hours tramping around a rugged landscape (admittedly collecting sheep poo); exhilarating sprints across boggy terrain to catch fleet-footed lambs; weeks banging my head against my desk trying to run statistical models.

Since then, I’ve managed to start to build a career as a biologist. I moved to Sheffield after my PhD in 2011 to work on a totally different animal: I used centuries-old church records from Finland to study human evolution. I then moved back to Edinburgh to work on the sheep for another year, before I started work as an Impact Fellow here in Stirling at the beginning of 2016.

My work is basic science: it won’t cure cancer or stop us from ageing. It tells us about how the natural world works and provides evidence supporting or disputing current scientific thinking. I’ve found that, rather than being ‘programmed’, ageing rates vary enormously between individuals and even between different aspects of an individual. I’ve shown that individuals vary in their ability to kill parasitic infections, shown that they vary in their ability to live with parasites, and worked out how these abilities may evolve through natural selection. Finally, I’ve shown how early-life experiences can help to explain why we get diabetes and why we live much longer than we did a century ago.

My ‘favorite, stand-out paper’ so far, is in PLoS Biology on Natural Selection. In the paper, we showed that while some sheep lose body weight rapidly with increased parasite infections, some sheep lose less weight. We can say that these individuals which lose less weight are more ‘tolerant’ of infection. Our work showed, for the first time in a wild animal, that more tolerant animals survive and reproduce better than less tolerant animals.

As an Impact Fellow, I try to do high-quality science that will be read by, and crucially, will inform the work of other scientists. I take responsibility to talk about my research with people who benefit from science (i.e. everyone!) through the press, social media and public engagement. I also use my blog to give insight into the life of a young scientist in the UK today. I’m incredibly lucky, but it’s not a life of gold-plated lifts and Ferrero Rocher: don’t let politicians tell you that all ‘experts’ are pompous know-it-alls. 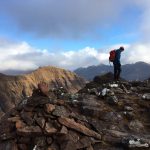 Work is fun, but not as much fun as actual fun. Exploring the mountains: now that’s fun. Photo by Adam Hayward.

My job involves countless, highly critical rejections from publishers and funders; weeks of failure with only glimmers of success; late nights fretting about presentations; dedication; creativity; open-mindedness; and a willingness to accept you’re wrong. Being wrong is not a bad thing, by the way: it’s called learning. But it’s worth it for the pride at having given a well-received presentation; the satisfaction of having your work favourably reviewed; the enjoyment of animated discussion with an eight-year-old about why anyone would find it useful to study sheep poo. And you can wear shorts to work.