Knowledge exchange in an infectious landscape: that infamous conversation article by Luc Bussiere 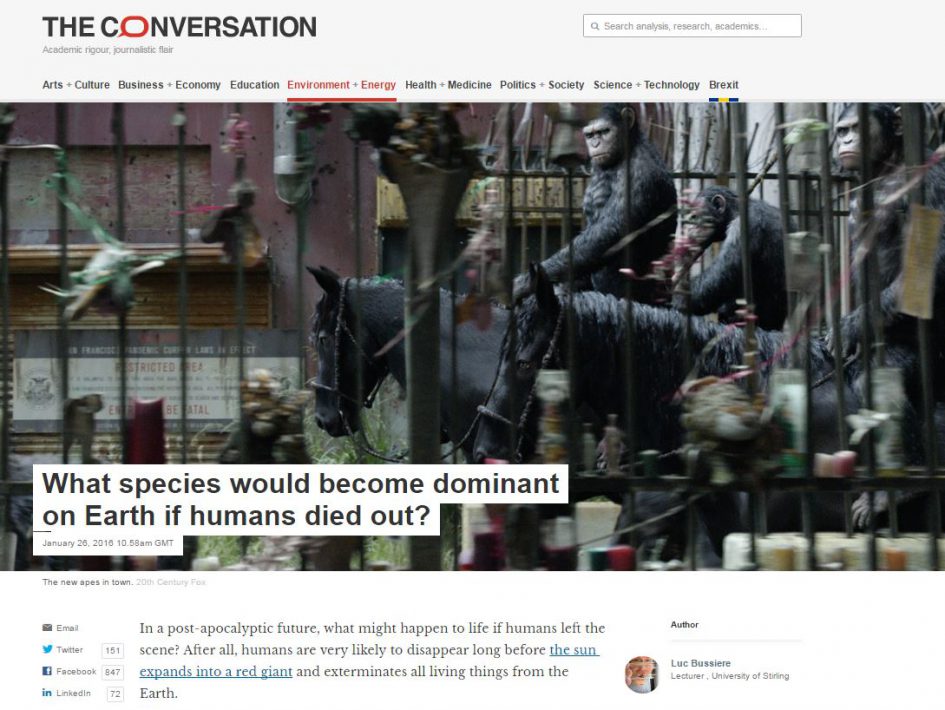 Luc Bussière is a lecturer in evolutionary biology within the Division of Biological and Environmental Sciences. His research focuses on the forces that create and maintain diversity in expensive and showy traits, especially sexual ornaments. Last January he published an article in The Conversation that went viral online, and has to date 1,670,907 reads (as of 30.11.16) and has since been republished in French.

Knowledge exchange in an infectious landscape

I am drawn to science fiction because it blends together the thrill of new discoveries with the satisfaction of intellectual understanding for its own sake. This pleasure can also be found in many academic pursuits, including my own: although I continually seek ways to apply my professional scientific interests to pressing human problems, I also recognize that much of my motivation comes from the same curiosity and imagination that allows me to escape in fantastic books and films.

My main research activities involve studying peculiar adaptations for mating in some arguably obscure groups of insects, and consequently there are few matters in the public discourse that call for my expertise. Nevertheless, scientists should actively engage with the public that funds their endeavours, so I keep an ear to the ground, and sometimes the ground speaks. Last January, Corrie Campbell in the University Communications Office asked if I would be willing to make a pitch to The Conversation on the following topic:

Planet of the Apes? We are looking for an evolutionary scientist to explore life beyond humankind. If humans were to die out, which species would be most likely to evolve and why? For example, would chimpanzees and other apes, which are able to use tools, automatically win through – or are other hardy and more widespread fauna best placed to take over?

As you might imagine, my special training in insect sex gives me no privileged knowledge about a future planet without humanity. But I sympathized with this question’s naked appeal to curiosity – after all what could be farther from modern human concerns than the fate of other animal lineages long after our disappearance? This was a question for a basic scientist! Moreover, the sci-fi angle afforded a topical way to engage readers in the details of evolutionary theory, about which I can claim some expertise.

The pitching of my article, its composition and the editing processes were all surprisingly painless, especially when compared to normal academic writing. The professional editor of The Conversation with whom I worked provided several great suggestions and supplemented the piece with fantastic photos, but she also allowed me to write in my own voice.

The day after the article was published, my Estonian sister-in-law sent me a link to the Postimees newspaper, the largest-circulation daily in the Baltic region, along with a tongue-in-cheek compliment for my excellent Estonian: my article had been translated and sat near the top of the home page. A few days later, my editor told us that we had reached 1.2 million hits for the story. Since then, I have discovered translations in many languages including Indonesian and Vietnamese, a Youtube video that reads my article aloud (along with a backdrop montage of appropriate imagery), and largely failed to follow a Twitter conversation in Arabic that tagged me as the author of the article (although Google translate suggests a vigorous debate!).

The story’s big splash was as surprising to me as anyone else. I wish I could explain it (and reproduce it), but there’s undoubtedly a big dose of chance involved. After all, the premise of the story was not really original: as I noted in my article, many previous authors had asked a similar question, and suggested their own answers. In contrast, my contribution was deliberately modest: I don’t know more than anyone else what the next dominant species will look like (although I maintain that a Planet of the Apes is extremely unlikely). Perhaps the story caught on not in spite of this hedging, but because of it: the story was designed to provoke thought instead of professing a strong position.

Whatever the explanation, I am delighted by the widespread discussion, which has engaged far more readers than I expected with some of the hidden assumptions people have about the place of humans in evolutionary history. I hope that the evolutionary principles underpinning my argument are clearer to my audience, and that these principles can help some readers to acknowledge the temporary nature of our prevalence on Earth. In my view, appreciating this position is both humbling and exciting, and the sense of wonder that it provokes validates one of the central missions of a modern university: to make us all think.

About Us, Research Profiles, Social Media