Why will studies of exercise and nutrition for healthy ageing achieve high altmetric scores? An interview with Dr Oliver Witard 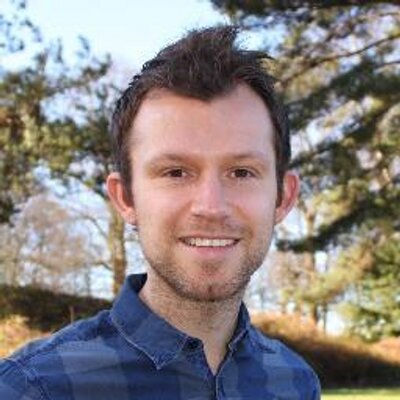 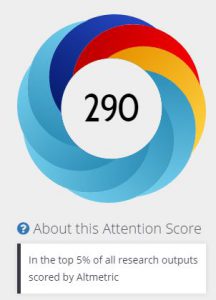 Growing older with health and vitality: a nexus of physical activity, exercise and nutrition – Altmetric ID 5623567

Reflecting back on some of the headlines by University of Stirling researchers in 2016, the work done by the Physiology, Exercise & Nutrition Research Group (PENRG) was certainly been in the limelight last year.  When reviewing our altmetric  data for 2016, one of the group’s publications from last year caught our eye as it is already in the top 20 for all-time attention in Stirling’s publication records – Witard O, McGlory C, Hamilton DL & Phillips SM (2016) Growing older with health and vitality: a nexus of physical activity, exercise and nutrition, Biogerontology, 17 (3), pp. 529-546 – despite only being published in February 2016!  With this in mind, we approached the first author of the paper, Oliver Witard, to find out more about his work, and the work of the PENRG group, that is having such impact and generating so much discussion in the media.  Another article which received lots of online interest, led by Dr Lee Hamilton and co-authored by Oliver, was the Conversation article Game of Thrones: The Mountain has revealed his giant diet … here’s what it would do to you, which, at 5th January 2017, has been read 416,646 times and republished by 9 sources. 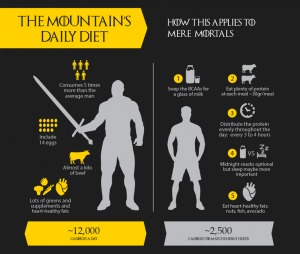 Infographic from the Conversation article, produced by the University of Stirling

We talked about the online interest generated from a number of publications last year, focussing on what’s involved in achieving impact, the difficulties related to defining impact, and what evidence to choose to demonstrate impact.  Oliver told us that research success, at least in his field, is based on collaboration. Oliver also emphasised the importance of interpreting research findings within context and cautioned against over-interpreting research findings. In Oliver’s research field, the ‘perfect study’ does not exist, since there must be a trade-off between proof-of principle (i.e. laboratory controlled but reduced real-world application and practical application). He gave us an example of a study that recommends 60g of protein per meal serving for older people, however acknowledges that 60g is a large protein dose, especially given that older people tend to have smaller appetites, and protein suppresses appetite.  So when it comes to the nuances and complexities involved in a scientific study, it can be difficult to translate them into tangible outcomes that have a clearly defined link to a change in practice. On the other hand, Oliver talked about the positive side to impact, as it helps researchers remain focussed on the ultimate goal: i.e. to improve the health and well-being of our population.

We found out more about the Healthy Ageing paper and why it had generated so much attention.  It’s a review article that summarised Oliver’s invitation to speak at the 2015 British Society of Research in Ageing meeting.  The publication generated the attention that it did because it’s a paper that relates the deterioration of muscle mass— an inevitable part of getting older— to the problems that come in older age such as an increased chance of falls, diabetes, and obesity.  The paper talks about optimising protein intakes and exercise interventions to delay the loss of muscle mass, which usually starts in the 40s.  Oliver told us that the attention this and other publications have had in the group is because the research findings can easily be translated – there’s a lot of confusing recommendations made about nutrition, and these kinds of papers help to add clarity.  An important point made in these papers is the importance of context, as recommendations for older adults will differ compared with younger people, as well as other variables such as gender and level of athletic conditioning.  STV picked up on the research and interviewed Oliver and other organisations have produced webcasts, such as the British Nutrition Foundation.

Having heard about his successes this year, we asked about Oliver’s research background.  Joining from the University of Birmingham after completing his studies and first post-doctoral position, he started as a post-doc at The University of Stirling almost ten years ago, and is now a Senior Lecturer in Nutrition and Exercise Metabolism.  Having always been interested in sport, and through his research, Oliver has developed a specialism in the optimisation of athlete performance, health engagement, and understanding nutrition and the intake of protein for health improvements.

As Oliver has completed the journey of an Early Career Researcher, we asked him for any advice he would give to others starting out or on that journey already.  The main piece of advice, and every time we ask a senior researcher such a question, it’s usually the same answer – take every opportunity that comes your way.  Accept invitations to talk at events, try and meet as many people as you can – “Always think of the exposure and snowball effect”. Oliver’s advice also included investigating funding sources as he encourages ECRs to try and find out about the smaller pots of funding that are available to help you get pilot studies and data that will follow on to bigger sources of funding.  Oliver was also a member of the 2013 Scottish Crucible cohort, which he says supported his research career in a number of ways as it supported confidence building, led to excellent connections and media opportunities, and allowed him to think outside the box, all of which have helped in his grant applications.  Another piece of advice Oliver had was to try and get a mentor, ideally someone with experience of the types of funders and panels you’re interested in applying to.

At the University of Stirling, Oliver has found a supportive environment which really helps researchers to work together and collaborate.  He talked about the opportunities for collaborative work with researchers in ageing and sustainability of food production, and Stirling is certainly a fantastic place to move such opportunities forward.

It was great to speak with Oliver and find out more about the research behind the headlines we’ve seen last year.  If you’d like to find out more why not check out Oliver’s new webpage, or find him on twitter.