Fiona recently accompanied William & Charles at their SmartGov Virtual Conference hosted at Stirling. In between tweeting the discussions of the conference, Fiona was really interested to know more about Smart Cities, so she asked Charles & William to explain what a Smart city is and shine an ‘intelligent’ street light on their current research in this area.

Most of us will have heard something about Smart cities, but perhaps are unsure what the term really means? Using examples from ‘cutting edge’ research which we are conducting here at the University of Stirling, where we are uniquely looking at Smart cities from the ‘lens’ of the citizen, we will try to help to fill some of those gaps.

Smart cities often feature a city-wide vision to engage citizens and businesses, using the power of new information and communication technologies (ICTs) to make the city more sustainable, more informed, and more connected. These new technologies are being used to transform the delivery of public services, allowing greater interaction with citizens, and providing opportunities for participation in decision-making. In Scotland, every one of its seven cities are Smart cities (Aberdeen, Dundee, Edinburgh, Glasgow, Inverness, Perth and Stirling), and they have formed the Scottish Cities Alliance, creating ‘Scotland’s 8th city’ – a virtual Smart city in which ‘all seven cities are working together to expand their Smart city capabilities.’[i] Smart cities are a world-wide phenomenon, and while no two Smart cities will be the same, the following model of a Smart city illustrates some of the common components: 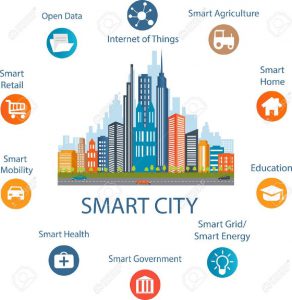 A key feature of the Smart city is about incentivising and engaging the ordinary citizen to participate in the life of the city, through new technologies, in ways in which they may not have tried before, including taking part in decision-making, or shared learning. For example, this could be through a city app on their Smartphone, sometimes called a ‘city dashboard’, allowing them to access city information about traffic or air quality, or even to make a leisure class booking. Most Smart cities organise public ‘hackathon’ events, where teams of people compete against each other, and use open data and other information over the course of perhaps two days, to try to develop innovative ICT solutions such as new websites, or apps, which can be used to help in dealing with societal issues. Citizens may change their behaviour in relation to home energy usage, through the use of Smart meters, and increasingly, health services are using a ‘gamified’ approach to patients monitoring their own personal health, by having targets and rewards in the same way as activity ‘trackers’. Some Smart cities use ‘fablabs’ (fabrication laboratories) where experimentation with new technologies might take place, with the emphasis being on community-based shared learning. In other cases, citizen engagement may be involuntary, as in the case of ‘intelligent’ street lighting which is switched on only when a movement sensor detects someone walking close by. Citizens’ lives and relations with public agencies are increasingly occurring in the digital world, which, combined with the growing availability of publicly available open datasets, containing performance and demographic information, are creating new engagement opportunities for citizens.

Our research project, which started in October 2015, is funded by the Economic and Social Research Council (£280k), and takes place through the Centre for Research into Information, Surveillance and Privacy (CRISP), based within Stirling Management School. The research project is called ‘SmartGov’: ‘Smart Governance of Sustainable Cities’[ii], a four year collaborative research project on the value of ICTs for engaging citizens in governance of sustainable cities (2015-2019). The three project partners are Utrecht University, (Netherlands); University of Stirling (United Kingdom), and Fundação Getulio Vargas, Sao Paolo, (Brazil). 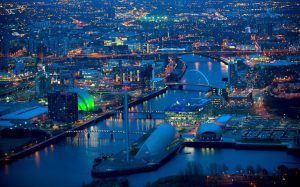 Our case study city is Glasgow, which secured £24m of UK Government funding in 2013 to become a Future City (another term for a Smart city), and we are working closely with Glasgow City Council in the development of our research, using legacy projects from the Future City programme as our case studies:

Since project inception, we have been engaged in the following activities, including plans for the next two years:

Participation in decision-making (or governance as it is sometimes called) might take place when citizens or citizens’ groups are invited by public bodies to engage with them to provide suggestions and views, for example about a new Council policy, or where to invest funds in new cycle paths or traffic calming measures, or how best to use some derelict spaces for a temporary period – perhaps urban gyms, pop-up gardens, or temporary art such as pop-up sculptures.[iii] Where participation occurs using ICTs, social media, or online questionnaires, and citizens’ views are helping to co-produce services and public policy, we call this Smart governance. When these forms of participation between local government and citizens produce tangible results, or ‘softer’ outcomes such as the building of trust and good relationships, this is known as ‘co-production’ which is dependent upon the input of both parties. Research into the processes surrounding Smart governance and co-production are of primary importance to our research project. Looking into the future, interactions between service providers and citizens will be increasingly digitally-based, where the newly empowered citizen has the opportunity to use ICTs and open data sources to participate in policy-making, decision-making, and shared-learning in ways which were unavailable previously. The SmartGov project will provide insight on these areas for public bodies, practitioners and citizens using comparative analysis from the three case study cities: Glasgow (UK), Utrecht (Netherlands), and Curitiba (Brazil).