The Iridis app, which is available for download next week, is a new app to help improve environments for people living with dementia. In collaboration with Space Group, the Iridis app will digitally assess how suitable a residence, care facility or other environment is for older people and those living with dementia. The app is an updated, digital version of the Dementia Services Development Centre (DSDC’s) existing paperback Dementia Design Audit Toolkit, which is currently available at the Centre.

Attendees were welcomed by Lesley Palmer, Chief Architect at the DSDC, who opened the launch by thanking colleagues (including Julia Campbell in Research & Innovation Services) who had helped in getting Iridis to this point. Lesley gave a quick run through of the history of the Iris Murdoch building and the cutting-edge research undertaken in dementia design and care at the University of Stirling, emphasising the rigorous research that underpins the Iridis app. Lesley added that dementia design and care is, for Stirling, a field where we want to continue to learn and the app allows for this through a feedback mechanism. 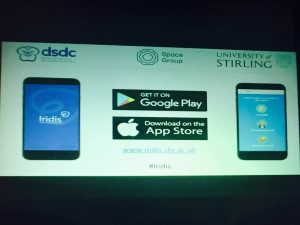 Next, Alison Dawson, Research Fellow in the Faculty of Social Sciences at the University of Stirling gave an overview of the research that enabled the development of the Iridis app. She spoke about the review that was undertaken, which concluded that:

Attendees also heard from Stephen Brooks, Director at Space Group, about the need for dissemination of knowledge in the area of dementia design and gaining feedback, possible through the Iridis app. Stephen explained that it is rare, within the construction industry, for designs to receive accurate, systematic analysis and feedback from users and rather, change takes place based on what is felt, known and trusted often incrementally and in silos. Stephen explained the need for access to accurate and empirical data and how this can take place at an unprecedented level through an app on a smartphone. 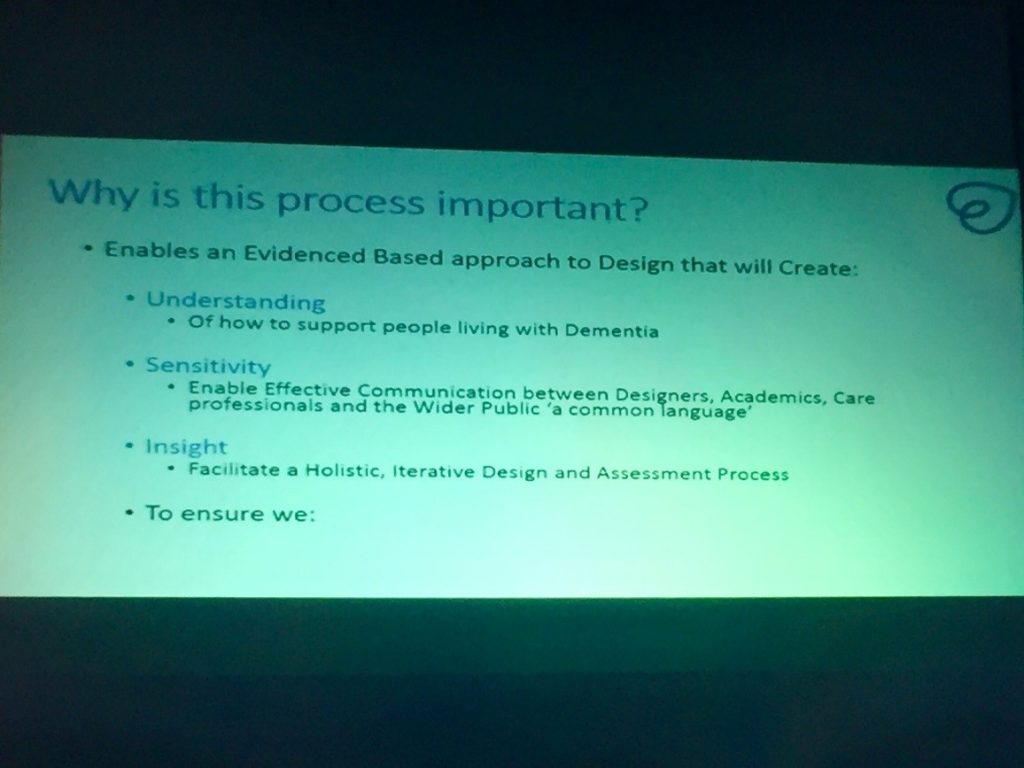 Richard Baker, Policy and Communications Manager at Age Scotland talked through the living environment affecting older people in a number of ways and the many benefits of the Iridis app, including improvements in homes, community facilities and hospitals. He explained that the diagnosis of dementia is life-changing, but, with the right support and access to services, people living with dementia can retain some independence and remain in their own homes for longer, ultimately living a more fulfilling life.

Chair in Dementia at the University of Stirling, Emma Reynish, closed the event speaking about the Older Person Routine Acute Assessment (OPRAA) project, examining the relationship between hospital costs of patients with dementia compared to those without cognitive impairment. There is an ongoing use of this cohort to better understand the older population who are admitted to hospital. Emma spoke of her experiences of working with older people, specifically in hospital environments, and the need to be sensitive the many small changes that can be made to improve their experiences. She explained that the launch of this app is the beginning of the next wave of dementia design.

Look out for the Iridis app available to download for free next week.