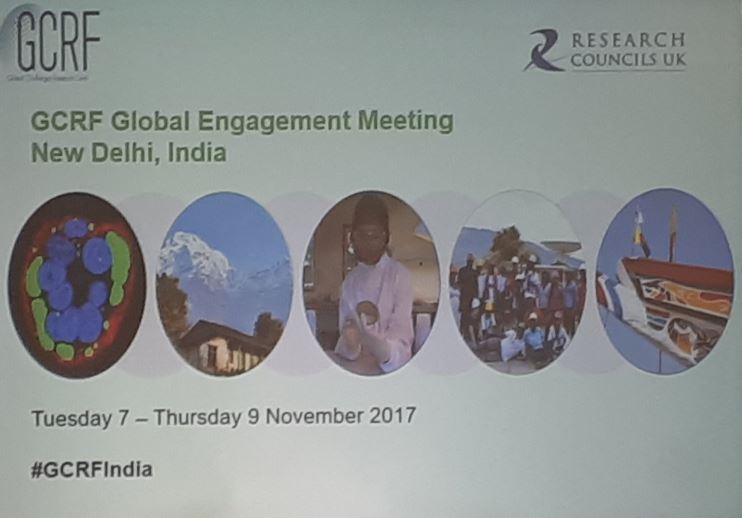 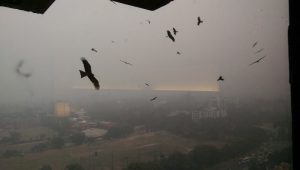 Kites & Smog from my Hotel Window

Four of us from Stirling, Jen Dickie, Matt Tinsley, Linsey Dickson, and myself, attended the ‘Global Engagement Meeting’ run by Research Councils UK in Delhi earlier this month.  We hadn’t picked the best week to visit Delhi, with farmers to the west of the city burning the stubble from their crops the city was covered in a thick smog with warnings not to venture out and roads blocked due to accidents.  Luckily we weren’t badly affected in our comfortable meeting rooms and by the time the meeting finished the smog started to lift.

The meeting was a true networking event with little clue given to attendees beforehand as to who would be there and what we would be doing.  It turns out this was deliberate to encourage new and unexpected conversations; this certainly worked as I ended up in discussions about wheat genetics, toilets (thanks Jen), rural irrigation, modern slavery, infectious diseases and finally, about ageing and dementia.  These broad conversations helped me see new connections between different fields and disciplines and develop new ideas on multidisciplinary working. 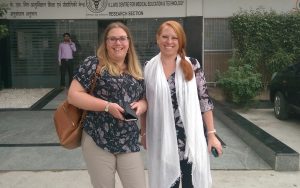 Linsey and Jen at the All India Institute of Medical Science

On the first day we visited the All India Institute of Medical Science (the third top medical institution in the world in terms of publications) and heard several eminent speakers there.  Their Dean of Research was Prof Mahapatra, the neurosurgeon responsible for the recent high profile operation to separate conjoined twins attached at their heads.

Prof Mahapatra set a theme of threes for the meeting with his use of a samosa to illustrate the three missions of AIIMS – patient care, research and teaching held together by the mashed potato of the Indian population (his metaphor, not mine). 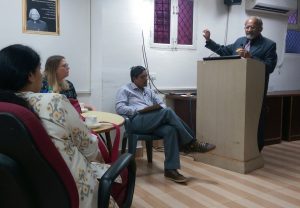 Dr Mahapatra with samosa in hand

This focus on threes continued through the meeting.  We discussed multidisciplinary collaboration, the UN sustainable development goals, and impact (Biryani, Butter Chicken and Kulfi); then doing the right research, involving the right people and focusing on impact from the start. The importance of these were illustrated by a colleague from Columbia who described a development project that brought water to a Colombian village saving the women there eight hours of walking a day.  When the project team came back to see how the project was going they discovered that the women were still walking eight hours a day despite the new water pump in their village – turns out those eight hours were valued time away from their [insert a descriptor of your choice] husbands.  Just a little reminder of the importance of participatory research when undertaking development projects.

I was lucky enough to stay on in Delhi for a couple more days, enjoying an enlightening and heartening visit to a dementia day centre run by the Alzheimer’s and Related Disorders Society of India who provide information and support to hundreds of families across Delhi but who struggle to find resources and support for their work.  I also visited a Centre for Excellence in Mental Health where new, creative dementia research is taking place and delivered a lecture to final year social work students at the University of Delhi who had little knowledge of dementia but who could see links with their learning on disability more widely.

If you are interested in hearing more about Louise, Jen, Matt & Linsey’s time over in India for the RCUK Global Engagement Meeting, look out for associated posts in this series coming too. While you’re waiting why not follow #GCRFIndia for tweets from our Stirling attendees and others.